UPDATE:
The second episode of Designated Survivor was so disappointing last night, I actually regret writing this the other day.  People’s Cube sums it up perfectly here:
http://thepeoplescube.com/peoples-blog/designated-survivor-can-t-survive-creeping-democrat-syndrome-t18715.html
RUSH weighs in:  “The first episode was kick ass. First episode is great. Episode two, they blow it. These people on the left cannot keep their liberalism out — and it’s always been there. Don’t misunderstand. What’s happening now is they are in our face.They are using prime time television entertainment shows to preach to us, to belittle us, to mock us, to make fun of us to advance their agenda or whatever. There’s no wonder why ratings are down.”

CLINTON: The other day, I saw Donald saying that there were some Iranian sailors on a ship in the waters off of Iran, and they were taunting American sailors who were on a nearby ship. He said, you know, if they taunted our sailors, I’d blow them out of the water and start another war. That’s not good judgment.
TRUMP: That would not start a war.
CLINTON: That is not the right temperament to be commander-in- chief, to be taunted. And the worst part…
TRUMP: No, they were taunting us.

That was a transcript from Monday night’s presidential debate between Donald Trump and Hillary Clinton. First, I will just point out the obvious.  The only person on that debate stage who helped start a war—in Iraq—is Hillary Clinton.  I’m sure that Hillary, her cronies and worshippers would like you to forget just how Mrs. Clinton lost the Democrat nomination to Barack Obama in 2008.  As Secretary of State, Hillary and Obama went to war, illegally, in Libya with absolutely no plan whatsoever once they leveled Muammar Gaddafi and his government.

Other than Hillary being totally unlikable, craven and untrustworthy, if I had to choose one thing that turned the Democrat left base over to Obama in 2008, it was her vote to go to war in Iraq. She tried to run from it, parse it, spin it, but she could not hide from it.  Recall this moment from 2006 of Code Pink leader confronting Hillary over her vote. 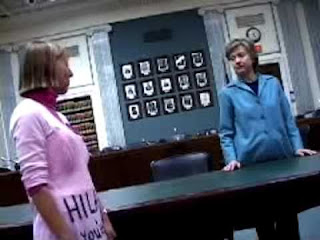 And now here she stood on the debate stage, in one of the most egregious cases of projection, trying to paint Donald Trump as a war monger and herself as the diplomatic dove with superior judgement and temperament.

As for Trump, I didn’t think his debate performance was horrible as the media make it seem, but he missed many opportunities to hit Clinton on several issues including when she brought up his comment about blowing an Iranian ship out of the water after they taunted the Navy.

Here is what Trump should have articulated at that moment:

“The reason the Iranians were taunting our sailors is due the feckless leadership of President Obama and career politicians like Secretary Clinton.  The Iranians know that they could get away with just about anything right now.
In January 2016, just six months ago, our US Naval Officers were seized and humiliated by the Iranian military. To this day, we still do not have the full story of how it exactly happened.  The Iranian state run media showed images of our sailors on their hands and knees. They didn’t even try to fight their way out of it.
Why is that? Were they given another stand down order like the one given by the Department of State under your leadership in Benghazi on the night of September 11, 2012?  Our troops deserve better and to not be humiliated on the world stage so, yes, I would resort to drastic measures and support our troops in a conflict like that.
And please, Madame Secretary, you shouldn’t be accusing others of poor judgement and starting wars because it was your vote that enabled the Bush administration to begin a war in Iraq before you decided that you were against it when you felt it benefited you politically.”

See how easy that was?

While I am not a big TV show viewer, I recently got hooked on a new show called “Designated Survivor” that airs on ABC Wednesdays at 10 PM.  The long and short of the show is, Kiefer Sutherland plays Tom Kirkman, a cabinet secretary and designated survivor, who assumes the presidency when a bomb goes off in the Capitol building during the State of the Union address wiping out a majority of the members of the federal government.

Shortly after the bombing, the Iranian government, seizing on the opportunity that America is at a disadvantage, sends its destroyers to take control of the Straits of Hormuz.  President Kirkman then meets with the Iranian Ambassador in the Oval Office.

The meeting goes something like this:  Iranian Ambassador (IA) enters and offers condolences to the president and all Americans and pledges if there is anything the he could do to help he would.  President Kirkman says the first thing that the IA could do is to tell his superiors to remove their ships from the Straits of Hormuz at once.

Of course, the IA dummies up and acts like he doesn’t know what Kirkman is talking about as if it some kind of conspiracy theory.  Kirkman informs the IA that his defense team is already mapping out an attack plan and,  if Iran doesn’t dock their ships within three hours, the US military will reduce Tehran to rubble and glass.

The IA agrees to Kirkman’s request and leaves the Oval Office as if he’s seen a ghost.

As a viewer, the first thing that went through my mind was, this is what we need in a president!  I believe anyone watching that scene, after witnessing eight long years of an Obama administration, most of those years with Hilary Clinton as the face of Obama’s foreign policy, felt the same.

The show’s debut was an instant hit in the ratings and that is due to the creators, writers and producers who are smart.  They’ve tapped into a feeling in this country where most American TV viewers are tired of seeing their country getting pushed around and being led by a pansy who has bowed and apologized his way around the globe.

They want strength, not weakness.

While Trump’s comments about blowing an Iranian boat out of the water because they were taunting our Navy may not be politically correct and what Hillary Clinton and the ruling class finds acceptable, I feel it resonates with the average, every day, garden variety and pissed off American who is tired of seeing his/her nation being diminished on the world stage.

View all posts by Mr.L

This site uses Akismet to reduce spam. Learn how your comment data is processed.