Today I woke up the same way I wake up every day with coffee, internet news on the tablet and cable news on the TV.  I clicked over to the NY Post to read columnist Michael Goodwin’s article “American Journalism Has Collapsed Before Our Eyes.” Go here to read it.

I agree with Goodwin one hundred percent.  Is the media pulling all the stops to try to take Donald Trump down?  Absolutely.  On cable and nightly network news, it is wall to wall Trump coverage 24/7.  Most of it is negative. Meanwhile they virtually ignore Hillary Clinton and her campaign.

Benghazi?  It’s old news.  The Clinton Foundation is operating like a money laundering scheme?  It’s a nothing burger.  Is Hillary’s health an issue? Move along nothing to see here.  Do they ask why Hillary wore a wool coat at an outdoor east coast fundraiser in 90 degree heat in August?  Never.

The bias is undeniable.

My beef with Goodwin is that his article reads as if this all started with the presidential candidacy of Donald Trump.  It did not.  The year that the media and mainstream journalism collapsed before our eyes was 2008.  Sean Hannity has often referred to the year 2008 as “the year the media and journalism died.”

It was clear to everyone with a thinking mind that the mainstream press knob-slobbed then Senator Barack Obama while he was running for president.  But they really went off the wall when Governor Sarah Palin was picked as John McCain’s running mate.  With the national introduction of Palin, for the first time in the entire election cycle of 2008 there was a clear and present threat against Obama.  The media clearly had to take her down.

They had every reason to worry.   For the first time in the general election race, McCain was up in the polls right after Palin’s thunderous RNC acceptance speech.

Then there were the crowds.  McCain’s crowd sizes in 2008 were very much like Hillary’s in 2016.  He couldn’t get a thousand people to show up for him anywhere.  After he picked Palin, that all changed… 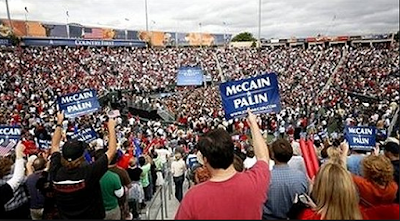 Somehow the media and the left forgot all about taking John McCain down. It was as if, all of a sudden,  Palin was at the top of the ticket and McCain was this non entity.  They didn’t just go after Palin herself.  They went after her family and even her kids.

One could argue that it was President George W. Bush who was the target of relentless attacks by unhinged leftists when the Iraq War campaign began to fall apart.  This is true. But Bush was a sitting president with a record that many Americans didn’t approve of at the time.  Palin was simply chosen to run as second billing on a ticket.

Speaking of records, Palin has a superb one. You just wouldn’t learn that from the media coverage.  While the media defended a two year do nothing Senator as a man of accomplishments, the mainstream media refused to discuss Palin’s record.  To this day, many in the media classify her as “unqualified” to be president.

The thing that frustrates devout Palin supporters the most is the media’s willful blindness of her record.  This is a woman who was a two term Mayor, Commissioner of Alaska’s Oil and Gas Commission and a Governor who once had an approval rating of a whopping 93%.  As the Governor of Alaska, Palin accomplished some of the following:

Reduced debt liabilities of her state by 34%. This is something many establishment GOP operatives who loathe Palin praise Scott Walker for accomplishing the same in Wisconsin.
Cut spending more than 33% in fy10 from fy-09 budget.
Amassed a $12 billion budget surplus for the state.
In 2008 alone, she vetoed $268 million from budget bills.
Reduced requests for federal earmarks by 80%.
Increased oil production by forcing the oil companies to drill on land they held leases on for over 30 years.
Made sweeping ethics reforms.
Reformed state pension system.
Instilled fiscal policies that upgraded her states credit rating from AA to AA+ in 2008 and eventually to AAA in 2010, unlike the Obama’s policies that have downgraded the nation’s credit rating, for the first time in history.  It should also be noted that since Palin stepped down as Governor in 2009, Alaska’s credit rating has slipped under Governors Sean Parnell and Bill Walker.

Many supporters of Sarah Palin, then and now, argue that Palin was more qualified than both John McCain and Barack Obama.  Yet the media portrayed her as a clueless neophyte who was only the Governor of some back woods state.

Who could forget the infamous Katie Couric interview?  Palin has since admitted that she should have given a better answer, but many would argue that “What newspapers do you read?”  sounded an awful lot like “Can you read?”   Of course, if you put the Couric interview into context with this video, it was clear that Couric had a bias against Palin from the jump:

Yeah, she sounded really objective with no agenda there didn’t she?   Why the McCain campaign would allow Palin to be interviewed by such a mind slut is beyond me.
Many of these interviews that were done with Couric were selectively edited to make Palin appear like a dolt.  Many in the media, right and left pundits, defended Couric as a respectable journalist who would never do such a thing.  Eventually, the truth came out as Katie was recently caught red handed selectively editing a documentary about gun violence and trying to make Second Amendment supporters appear like uninformed dolts.

There were several other interviews where supposed respectable, unbiased news people quickly became DNC Obama operatives who were only interested in taking Palin down.  Charlie Gibson comes to mind.  She didn’t know the minutia of the Bush Doctrine.  SCANDALOUS!

What was missing from news coverage of Palin were the scenes from the campaign trail that showed Palin’s skills as a retail politician.  You were not allowed to see how good Palin was, and still is, at connecting with average ordinary Americans.  This is one of my favorite lost clips of Palin at Tony Luke’s Cheesesteaks in Philly…

Footage like this made it to CNN’s website but was never shown in any one of their prime time shows or on any other networks either.  Why?  People would have seen that she’s human and likable.  No, the media told you she’s either stupid or evil and you need to just pick either narrative and stick to it and shut your mouths.  Believe it or not, the grad student, obviously a Kool Aid drinker of “Hope and Change,”  who was asking her “What are you going to do about Pakistan?” was given five minutes on prime time CNN to discuss his encounter with Palin.

To this day, I would really like to meet that putz in person and ask him “What has Obama done about Pakistan?”

The attacks on Palin didn’t stop after Obama won.  They continue to this day.  The entertainment media complex that backed Obama, out of total fear that Palin would mount a presidential campaign of her own in 2012, actually produced a full length feature film totally devoted to bashing her.

But media bias didn’t just begin and end with Sarah Palin.  Up until 2008, media bias was either hidden or accused of being some trumped up claim made by foolish right wingers who didn’t agree with their “factual reporting.”  The arrival of Sarah Palin as a national figure simply exposed the bias for all the world to see what was already there.

Accusations of liberal media bias is not just right winged paranoia.  The proof is in the numbers.  Survey after survey show members of the press, who consistently declare their objectivity in news reporting, voted Democrat since 1970.  The most memorable survey was a Roper poll conducted after the 1992 presidential election.  The results revealed that a whopping ninety one percent of journalists unabashedly voted for Bill Clinton.

Did you forget about the secret online club “Journolist”? Think of it as four hundred Walter Durantys, all liberal and scheming to push Health Reform, Cap and Trade and any other radical plan served up by the Obama administration. They also took delight in attacking conservatives like Sarah Palin, Rush Limbaugh, Matt Drudge and Andrew Breitbart.

Speaking of dishonest journalism and Andrew Breitbart, I recall when Breitbart pledged one hundred thousand dollars to the person who could present the video of tea party protestors who were accused by the national media of shouting racial epithets and spitting at the Congressional Black Caucus after the passage of Health Reform legislation.  On March 1, 2012, Andrew Breitbart took his hundred thousand dollar pledge to his grave.  Not one video surfaced to back up the media’s claims.

Well before Palin and Trump, media bias was hidden from the public.  During the Vietnam war, the late Walter Cronkite was considered “the most trusted man in America.”   As time moves on, the American public question his legacy and think of him as “the most destructive man in America.”  Many Vietnam veterans and historians cite Cronkite as the reason the U.S. lost that war.  To support this theory, Cronkite’s critics point to infamous battles like the  Tet Offensive.  Tet and other battles in Vietnam were victories for our troops.  Cronkite was hell bent on reporting them as a loss.

Cronkite continues to slap the faces of the men who fought in died in that war from his grave.  A few years ago, reports obtained by the FBI through the Freedom of Information Act show Cronkite actively assisted and advised Vietnam war protestors who were students at Rollins College in Winter Park, Florida.  Cronkite went so far as to offer a helicopter flight, paid by CBS, to transport Maine Senator Edmund Muskie to one of their rallies.

Traces of liberal media bias goes back farther than Cronkite.  In the 1800’s, a new political party based on patronage was formed as the Jacksonians, then later, the Democrats.  When the party wanted to push social reform, it needed the power of the press.  The Jacksonian Democrats bought newspapers and put party faithful Democrats in newsrooms to advance their agenda to a skeptic public.

As you see with case after case of dishonest agenda driven reportage is how the mainstream media succeeded in getting a lower approval rating than Congress.

I beg to differ with columnist Michael Goodwin.  The media biases that have gone over the years have been well hidden from the public at large for decades and behind the façade known as “serious objective journalism.”  The biases were exposed with the media’s naked and unhinged attempts to try to take Sarah Palin down while they acted as advocates of Obama in 2008.

The death of the media didn’t happen with Trump and the year 2016.  What the late Andrew Breitbart called “The Old Media” has been on a path to irrelevancy and dying a slow death for decades.

View all posts by Mr.L

This site uses Akismet to reduce spam. Learn how your comment data is processed.